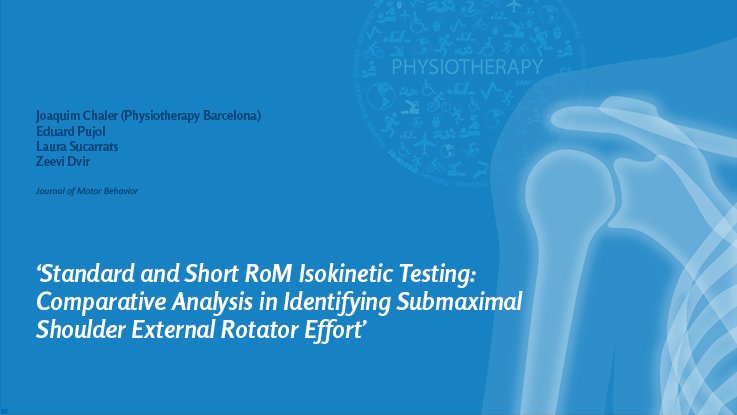 One of the characteristics of the teaching staff in the Degree in International Physiotherapy is their dedication to the field of research. On this occasion we would like to highlight the study entitled ‘Standard and Short RoM Isokinetic Testing: Comparative Analysis in Identifying Submaximal Shoulder External Rotator Effort’, in which the lecturer Joaquim Chaler, a specialist in Physical medicine and rehabilitation has participated.

The study focuses on an isokinetic-related parameter that marks the difference between eccentric-concentric strength ratios at two distinct test velocities (DEC), based on a 60° (standard) range of motion (RoM), which has been proven to be highly efficient in detecting simulated muscular efforts. This study aimed to verify whether a DEC derived from a much shorter test RoM (20°) was as useful as a long RoM-derived one.

In order to carry it out, eighteen healthy men (32.4 ± 6.4 years old) took part in this study focusing on measuring the external rotation isokinetic strength of the shoulder. Participants performed a maximum external rotational effort of the shoulder (eight pairs of concentric and eccentric contractions at high and low speeds at short and long RoM) and were then instructed to simulate maximum effort. Contraction velocities were adjusted accordingly by applying a 1:4 gradient and peak moments were registered.

Both DEC conditions were then calculated by subtracting the eccentric and concentric strength ratios at low speeds from those at high speeds. Curiously, the DEC scores in the simulated effort were significantly higher than maximum effort ones in both conditions, in men. This enabled the setting of specific cut-off levels for separating the efforts. Both approaches revealed a coincident sensitivity (78%) whereas short RoM showed an even higher specificity: 88% versus 78%. Thus, the short RoM protocol provides clinically acceptable detection power.

This publication by the lecturer Joaquim Chaler can be consulted by clicking on this link.